Why hoodies were invented

One warm summer night, a few years ago, I was leaving work- about 4 am, I worked nights. I stopped to chat with one of my old co-workers who was walking in. 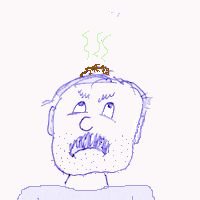 Just then a big old seagull came out of nowhere, and crapped on the back of my head, and all down my neck. My friend could barely contain her mirth; but to her credit, I was able to swear her to secrecy about it. (Otherwise, I would have never heard the end of it from the guys in the warehouse.) She claims that it’s supposed to be good luck to have a bird poop on your head. I don’t buy into that notion. Maybe if it was just a baby robin, not a seagull the size of a velociraptor.

Drove home hunched forward, with paper towels on the seat, and the windows rolled down.

I had left work a little early, so it was just getting light out when I got home. For some reason, I had the spare car keys, so- no house key! I COULD NOT roust anyone for the longest time. Tried going in the back yard and throwing pebbles and random stuff up at the bedroom window, but Teresa had the fan on and she sleeps like a log. I went around and rang the doorbell some more, tapped on windows, finally started banging on the door Fred Flintstone style.

Eventually my daughter came to the door. I ripped off the shirt I was wearing and said something about “What if the house was on fire?!! You would all die in your sleep!!” She didn’t say anything, just looked at me, bewildered, as I swept past her and took like a 45 minute shower.

This is why I always wear a hooded jacked to work.

Back in My Day

May 7, 2022 NeverJetHot
Back in My Day Ephemera

May 1, 2022 NeverJetHot
Back in My Day Observations

Not sure how I feel about this button

Cereal Mascots on the prowl