I had to MacGuyver it; A two-monitor setup using a vending machine stand 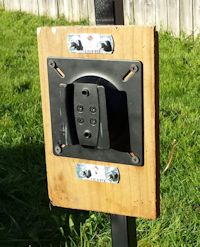 A guy at work was showing me his multi-monitor computer setup, and I thought it was nifty. But I didn’t want to buy another monitor, so I sort of dismissed the idea.

Later I remembered that there was an old VGA monitor in Daphne’s room. We had gotten it from the freecycle list years ago, it didn’t have a stand. I had to get a bracket and so I had mounted it directly to her bedroom wall.

I took it down and looked at it. How to use it as a second monitor? Looked at Amazon, there was an HDMI to VGA gizmo, so that would work. I cast about for something to use as a stand, no wall near my desk to mount it to. Wishing I knew how to weld.

But wait! There was an old vending machine stand in the garage, got some U bolts and black spray paint, and came up with this setup. The crappy plywood and u-bolt stuff is hidden by the monitor itself, no one sees it except the cat. The plan is to get a scrolling ticker thing set up that also displays an alert when an order comes in.

Clean your iron, it will make everything better.