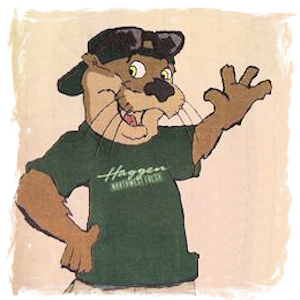 I was perusing the local free newspaper a while back and was stopped in my tracks by this enticing coupon. Haggen’s is a little upscale for our budget, but this $5 off $25 coupon should get us and many of the other riff-raff in the door. We’ll probably buy some gourmet mustard, or hot dogs infused with Parmesan cheese.

Their mascot looks like something straight out of a Simpson’s or even Family Guy. Like a Freshman in high school, he’s trying way too hard to be cool, and it’s sort of backfiring on him. I think it’s the backwards hat that did him in. At least his pants aren’t sagging.

Is Splash the Otter going to be at this event? I would go just to see some poor guy in the parking lot, sporting an Otter costume.

BTW, don’t they realize that Otters are part of the weasel family? Would you buy groceries from a weasel?

Cereal Mascots on the prowl

Number 4 will shock you!

A tribute to the Peter Putters of the world