How to use a telephone

We were watching an old “telephone manners” instructional video on Youtube, and I mentioned to Teresa the little booklet we got in like second grade when a genial fellow from Ma Bell came out to talk to us… So she goes upstairs and rummages around and guess what she kept… It had all sorts of useful information in it, here’s an example of how people used to communicate before telephones… It’s bad enough the messenger had to go on foot, but oh, those sandals… running in flip-flops! I have a hunch that a lot of these messengers slowed to a walk as soon as they got far enough away from the boss. 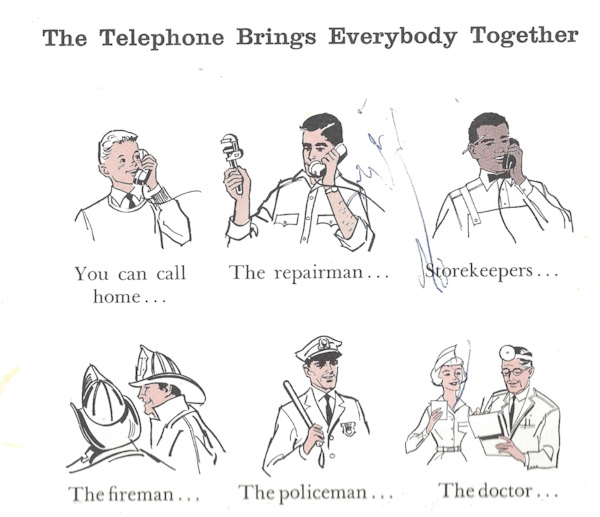 A nice things about the telephone, is that you can call anyone! Even Jimmy Head! (More on him later)

Not sure about the repairman who can’t figure out his wrench though… and I definitely would not call this cop! He is just dying to try out his new baton, having busted his old one over the skull of some random miscreant. 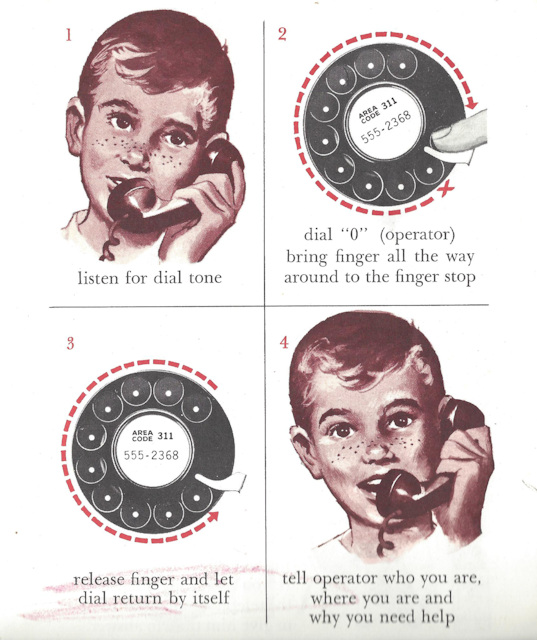 “Operator, may I have the number for child protective services? What do you mean it hasn’t been invented yet! My dad says he is going to beat the freckles off of me!”

“Sally, are you going to the Freckles Anonymous meeting tonight?…. Gee, that’s swell!” Here’s Teresa’s personal phone directory. Apparently Lorie H. had an unlisted number. I am guessing that Teresa could call Jimmy Head if she needed to track somebody down. He sounds like the kind of guy who knew where the bones were buried.

Back in My Day Ephemera