Our neighbors, Tarzan and Francis the Talking Mule 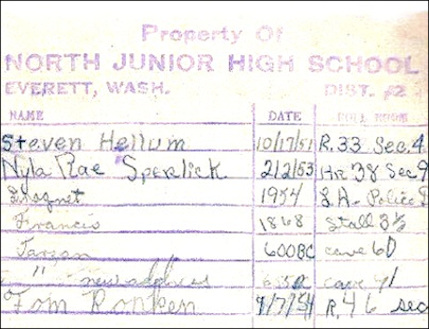 Here’s an old textbook from a yard sale. It’s sort of reassuring that previous generations also knew how to annoy the librarians.

I think all the entries after Nyla Sperlick and before Tom Ranken are the same kid, a kid who lived in a house with a television I presume… He checked out the book for “Dragnet” in 1954, then “Francis”, I presume he means the talking mule, as his address is “Stall 3 1/2” (Adding the fraction makes it funnier- this kid is a comedy genius).

Who knows why the date is 1868 on that one. Then back to 600 B.C. for Tarzan at cave 6D ( Picture a cave apartment – maybe Tarzan will bring Jane up to show her his etchings! ) Then five years later, Tarzan checks out this book again, but now he’s moved to “Cave 91”.

We can only hope that this kid got into advertising or some such lucrative endeavor, rather than getting electroshock therapy.

Brought to you be the Acme barrel Company

Superheroes doing the best they can

Lost on many levels