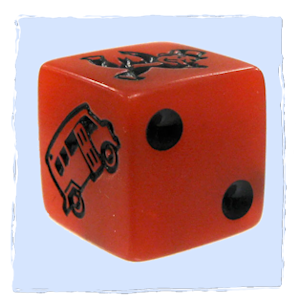 I got a tournament-approved Monopoly “Speed Die” from a guy on ebay, we started a game using this third die today. Not sure if we will vote to use it in the future.
The speed die does one of four things, three of them good but the last one very bad!

If the SD shows a one, two or three, you just add that to the other dice and move that much further. Good for getting back around to GO a little faster, I guess.
If the SD shows a bus, you have more options where to stop; For example, if the regular dice show a one and a six, you can move one space, or six, or all seven. Unfortunately, this slows the game a bit as players evaluate their movement options.

If the SD rolls a “Monopoly Man” aka Mr. Moneybags, and if there are unsold properties, after you take your regular move, you advance to the next unowned property. This would seem to speed up the game, but actually we have to go through a roll call every time; “Connecticut! Who owns it? Saint Charles- Does anybody own it?”

If the SD rolls a “Monopoly Man” and all 28 properties are owned, then after you take your regular move, you advance to the next opponent’s property and pay rent; This could mean paying rent two, or even three times in one turn, if you rolled doubles twice and were especially unlucky. It speeds the process of eliminating players, but I don’t like the “piling on” aspect of it. Am I just not ruthless enough?

There is less droll whimsy in the world today.

One thought on “Speed-die Monopoly; faster but more evil”