A salute to Chief Smith of Hartford, Alabama 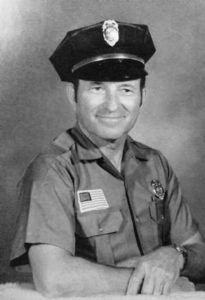 This is something my cousin in Alabama posted about my uncle, who died 25 years ago. I wish I had been able to get to know him. My dad says he was “quite a character” so there is that too, and I’m sure he had a lot of police stories to tell.

Today would have been my daddy, Junior Smith’s 89th birthday. He died 25 years ago at the age of 64, just a year older than I am now.

Most everyone knew him as Hartford’s police chief. He was a simple, humble man who was kind to everyone. Whether you were family, friends, or a stranger. At one time he owned a service station in Hartford. A family, traveling through, came in with a flat tire. He noticed what bad shape all their tires were in, and gave them a set of tires. If anyone charged anything, he would never send them a bill. He would always say, they know that they owe money, so if they’re not paying that must mean that they need it more than me. Needless to say he was not a great businessman.

One cold December day, several people in town called him to say that there were two strangers, knocking on doors, and asking for work. Daddy rode around and found two young boys about 18 years old. They explained that they were hitchhiking home for Christmas, and were just trying to earn some money. He gave them a ride out highway 167. On the way home he started thinking, those are someone’s children. So he went home, made some sandwiches, got a couple of warm coats, then cashed a check for $20. (he only had $40 in the bank). He drove back and found them, and gave them all he had.

Once on Christmas eve, a man showed up at the police station. He had no gifts for his children, and they were in need of food. The stores are all closed. He came to my house, and we went through the children’s toy boxes and gathered stuffed animals, dolls and other toys. After we wrapped everything, he went home and gathered groceries for the family.

He would take older ladies in town to see Dr. Strickland, pick up their prescriptions, or take them food. If your car broke down, just call him, day or night. He was Hartford’s Andy Taylor.

At his funeral the preacher told of the first time that he met chief Smith. When he first moved to town, he lived in an old house that was built off the ground. Every night this big red dog would get under the house, and howl all night long. He called the Chief, to see if he could help. Daddy came right away and picked up the dog. The preacher wasn’t sure what happened to the dog. Since it was a stray, he thought that dad might have had to shoot it. A few days later he was driving through town. He saw a little redheaded boy, with a big old grin, and with that big old red dog. Junior had found the perfect match for each of them.

My dad never had much as far as money or material things,
but he had such a huge heart, and he gave all he had to everyone.
I am so blessed that God chose him to be my daddy!
Sure do miss you, daddy.